Get a firm understanding of what makes QD-OLED special and the many benefits of adopting the new QD-OLED platform. 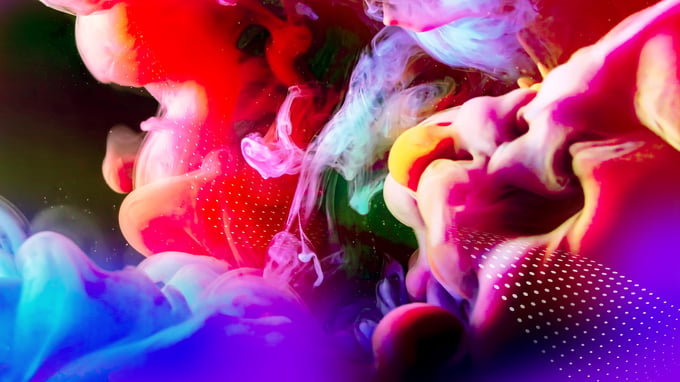 Color! What a deep and mysterious language, the language of dreams.

With QD-OLED, dream in colors never seen before!

The Ultra High-Definition (UHD) revolution is here! One of the key performance improvements in UHD is the adoption of high-dynamic range (HDR) and wide color gamut (WCG). It is this trinity of capabilities that can meet the consumer demand for realism, vibrant colors and sharp moving pictures. ITU BT 2020 and ITU BT 2021 standards were specially developed to support this growing ecosystem. However, most displays can only reproduce a limited amount of the standard specification (BT.2020). With QD-OLED, display makers and consumers can finally experience deep and rich color with truly expansive HDR. It is time to take the Quantum Leap!

So how can we measure color performance?

To compare modern display color performance, we have to expand our view from the SDR1 world (constant luminosity) to HDR world (Dynamic and Extended luminosity). Color as experienced by us is a combination of three things. They are Hue (Color), Chroma (intensity or purity of color) and Value (Light-ness). As UHD HDR displays shine best when presenting images over an extended luminosity range, their color performance should also be evaluated across the range. 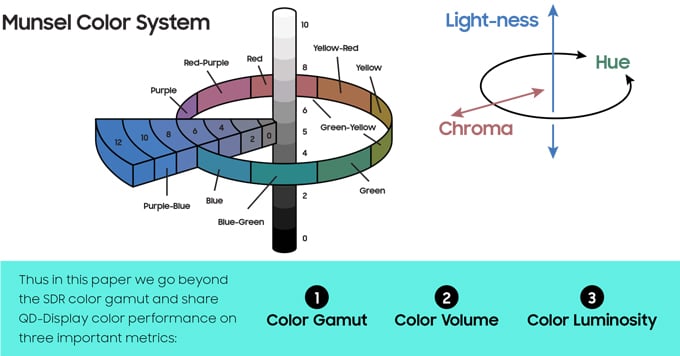 Thus in this paper, we go beyond the SDR color gamut and share QD-OLED color performance on three important metrics:

Samsung’s QD-OLED has red and green quantum dot material printed onto each sub-pixel. And unlike WOLED (White + RGB pixel) and LCD displays that rely on color filters to tune an image, QD-OLED’s color conversion allows for a far superior color performance.

QD-OLED’s full width at half maximum (FWHM) is 20 to 40 nanometers (nm) wide, which is 10 to 20 nano- meters narrower than that of other self-emitting displays. The QD-OLED’s slim spectral cones help to achieve an exceptional degree of color purity. Thus, each primary color will render its own color in a QD-OLED with remarkable clarity and also allow for more accurate combinations. 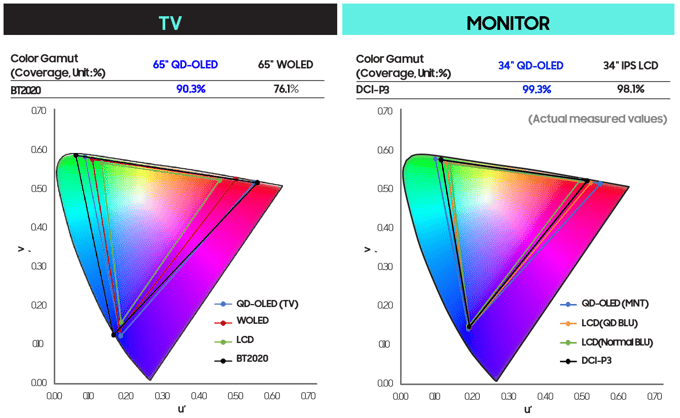 Color Volume is a 3D representation of the maximum color-reproduction capabilities of a display throughout the entire range of the display’s luminance. It Includes all colors throughout the entire luminosity range (not just those within one specifically defined luminance plane). Simply put, the larger a display’s color volume, the better it can express a vast range of vividly colorful imagery.

Luminance normalized - each color volume measurement is normalized to the peak luminance capability of that display for a more even comparison.

As HDR content gains consumer adoption in movies and games more products are being introduced to satisfy this demand. While peak luminance is important it is often marketed as the sole driver of HDR performance, and this can lead to unsatisfactory experience. Some self-emitting displays add white light to achieve the higher peak luminance. This allows them to claim higher luminosity but also reduces the vividness of bright colors.

The human eye is a trichromatic color receptor with three cones that respond to specific spectral sensi- tivities. The most efficient method of creating color in a display is by using a combination of red, green and blue lights (trichromatic). . In embracing color additivity, the QD-Display delivers a state-of-the-art high white luminance due to the quality of each primary color without compromising overall color fidelity.

Additive color mixing creates each additional color in a process that adds colors together. It is a well-mixed combination of different wavelengths that creates the incredible diversity of colors seen when viewing a display. 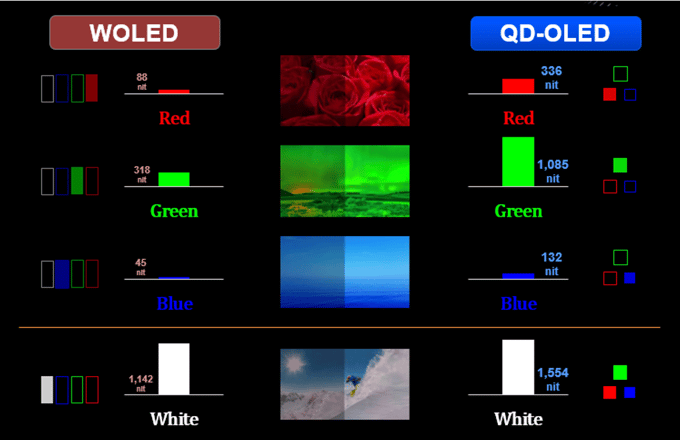 It is impossible to show what the eye interprets as brightness and colorfulness in printed pictures, so we captured the spectral image data of two pictures directly from two TV sets ― a QD-OLED TV and a WOLED TV. Our researchers fed and processed the spectral data in XYZ linear light using CIE’s color appearance model, CIECAM02, described in the CIE159:2004 Technical Report with recent improvements called CAM16 that were developed by researchers at Rochester Institute of Technology.

Lastly, we added color model improvements after further research. This research coalesces in how people perceive the brightness of a picture, and the dependency of that brightness on color in general, as well as the use of narrow pure primaries such as those found in a QD-OLED. The output of this advanced color model is depicted in Illustration below where we show (from top to bottom) a standard RGB image derived from the XYZ data printed for your reference. Here colorfulness is calculated by our model and the subsequent brightness for two images shown on each display.

In the absence of seeing QD-OLED in person, this new color analysis clearly demonstrates why consumers feel that QD-OLED is more “colorful” and “brighter” than any other display. You can read more on how to measure colorfulness here. 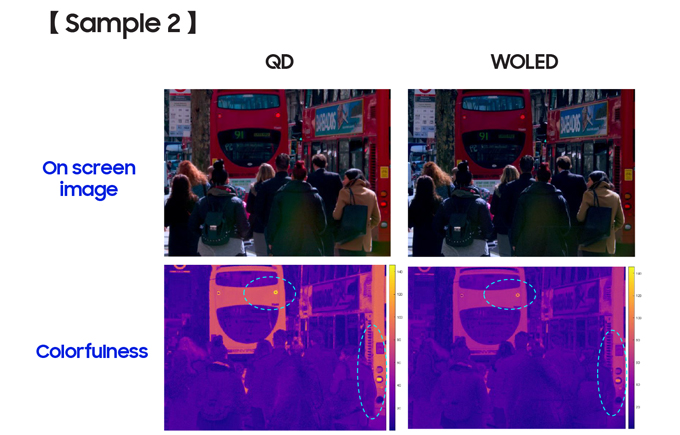 This whitepaper will give you a firm understanding of what makes QD-OLED special and the many benefits of adopting the new QD-OLED platform.

QD-OLED elevates your viewing experience with bright and vivid colors when compared to OLED(WRGB).